We've just uploaded our latest YouTube video - a review of a Logic Case SC-33380B based server solution for a customer of ours.

This was a single server system for a customer for use in a home-theatre installation as the NAS/Storage Server for HD movies and music. The system was built around a Logic Case SC-33380B chassis with Supermicro motherboard internals. It was designed to be quiet in operation, reliable and fast.

The bases for this system is a Logic Case SC-33380B 3U rackmount server chassis. It was chosen for this build as the customer has specific requirements, based around minimum number of drives, noise levels and depth. The chassis as standard has 2x 80mm front mounted fans that are whisper quiet. The whole front of the case is in effect one large air-vent, so the case has excellent natural air-flow. In front of the 80mm fans is a removable dust filter (by taking the chassis partially apart) and this will reduce the amount of dust in the system. Optionally the case can also take 2x top mounted 80mm fans and 2x rear 60mm fans. The top mounted fans are an excellent solution to extract heat from inside the case, but you cannot them put a system on top. In this instance the customer had equipment he was going to place on top of this so we installed 2x rear Fractal Designs 60mm Fans. These fans are a silent model, so compliment the quiet running of the system.

The Logic Case chassis also accepts a standard ATX PSU, but it must be a model with an 80mm fan and short depth.  For this system we chose a StarTech 530W 80plus Silent PSU. This was due to it having sufficient SATA plugs, but also for its 80mm fan and super quiet operation. When in use you can barely hear it running.

The chassis also accepts 10x 3.5” hard drives. There are 3x drive caddies, each supporting 3x drives, and then a further drive is supported under the PSU mounting. Note though you can’t use a Standard ATX motherboard if you want to use the 10th drive mounting under the PSU. Installed in this system were 6x Western Digital 4TB RED 6Gbps SATA drives. These are fantastic, quiet and cool running NAS drives, suitable for 24/7 operation. This gives 24GB of storage in the system. These drives were coupled with a Supermicro 8-Port LSI2108 PCI-e SAS2 RAID Controller. This is basically a rebadged LSI controller. It has 2x MiniSAS 8087 connectors, which on this system went through a StarTech MiniSAS to Discrete SATA breakout cable for use on the individual drives in the system. The RAID card for this system was setup in RAID 5. This was chosen for data redundancy, but more importantly also for data storage capacity. For this system, after RAID overhead and formatting with the NTFS file system there is 18.1TB of available storage!

Although difficult to see in the video there is also a 2.5” SSD, a Samsung 840 Pro 128GB mounted on a 2.5” to 3.5” converter, also made by Logic Case. This SSD is driven from one of the 6Gbps SATA ports on the motherboard. This will be used for the OS and in this instance running Windows 7 Professional 64bit.

The motherboard included is a Supermicro X9SCL-F. This board is MicroATX, has 4x ECC Unbuffered DIMM Slots, 3x 8x PCI-E slots , 6x SATA Ports (2x 6Gbps and 4x 3Gbps) and supports Socket 1155 processors, including E3 V1 and V2 CPU’s and Core i3 3rd Generation CPU’s. In this instance as no serious processing was required a Core i3-3220 CPU was used. This board also has the IPMI remote KVM onboard, Dual Gigabit LAN ports and onboard RAID support. It was a perfect fit for this chassis (although a little tight) and was a reliable solution for this customer.

The motherboard will accept up to 32GB of RAM, ECC Unbuffered. In this install our customer opted for 2 sticks of 4GB Hynix 1600MHz ECC Unbuffered DDR3 RAM, giving him 8GB of RAM.

Check out the video here! 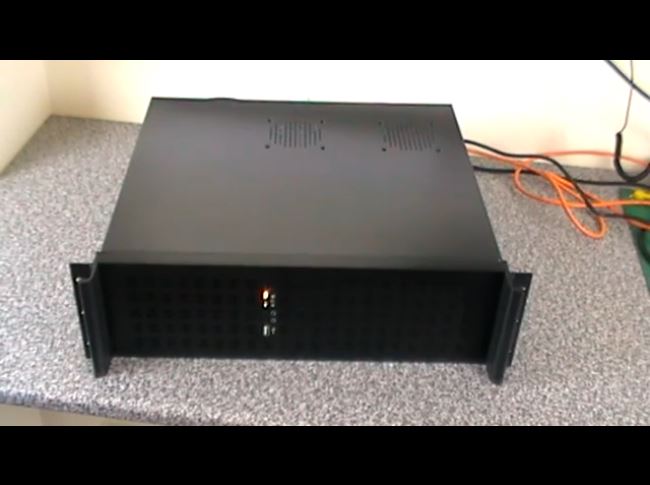