We've just uploaded our latest YouTube video - a review of a Supermicro based server solution for a customer of ours.

This is a system for a customer of ours in Denmark. They wanted a new server to replace their older HP Server that runs their office network (E.g. File Server, Exchange). We were approached with a basic list of requirements and proposed this SuperServer system for them based on their immediate and potential future requirements.

The bases for this system is a Supermicro SuperServer 6027R-WRF server system. We chose this chassis as the customer wanted a small rackmount system to accept dual E5-Xeon CPU’s, plenty of RAM expansion, 8x hot-swap 3.5” drive trays and redundant power supplies. This SuperServer includes all of this as standard.

Within the system are 7x Western Digital RED 2TB SATA hard drives. These are excellent drives – they’re in between entry-level and enterprise. They are designed for 24/7 use, have an excellent MTBF, excellent performance (6Gbps SATA III). While they are marketed as NAS drives, they are perfect for a small server install with one or two drives, up to a large array of 24+ drives. This customer opted for a multi-RAID configuration – using 2x drives in RAID 1 Mirroring for the OS (In this instance they opted for Windows 2012 Standard as the base OS), 4x drives in RAID 10 (Mirroring with Striping) for performance and redundancy, and a 7th drive setup as a Global Hot Spare. This drive would be immediately used in the event of a drive failure on either the RAID 1 or RAID 10 arrays.

All of these drives were connected to an LSI 9260-8i controller. These are fantastic mid-range controllers, featuring 512MB onboard writeback cache, which can be battery-backed. On this 8 port model are 2x MiniSAS connectors, each supporting 4 physical drives (or plenty more if used in conjunction with an Expander), and support SATA III (6Gbps) and SAS II (6Gbps). This model controller also supports all flavours of RAID, including 0, 1, 5, 6, 10, 50, 60 and JBOD.

At the heart of all of this is a Supermicro X9DRW-IF motherboard. This is a dual socket 2011, E5 Xeon CPU motherboard. This board in conjunction with this SuperServer was chosen as the customer wanted to use dual CPU in their system and while only wanted 64GB to start with, wanted to be able to expand this in the future. This particular board supports 1TB of ECC Registered RAM – plenty for even the most demanding of systems! Additional features of this board include dual Gigabit Ethernet, dedicated IPMI Interface (Remote KVM) and 4x full height PCI-E 8x Slots.

Installed on this board were 8x sticks of Hynix 8GB ECC Registered RAM. Due to the quad memory path feature of the E5-2600 V2 Series CPU’s it is recommended to install 4 sticks of RAM for each CPU.

The CPU’s chosen for this installation were 6-core Intel E5-2620 V2’s. These are the latest generation of Intel E5 CPU’s, available on the market around 4 months ago. These 6 core CPU’s support 12 threads too, so on this system that’s 24 available computing “cores” as seen in Windows – plenty for a single server such as this.

All of this is powered by dual redundant 740W 80 plus Platinum (94%+) Power efficient PSU’s. When we were testing this running Windows 2012 (and above hardware specifications) the system was only drawing 150W of power (at UK 240AC). That’s very efficient!

To keep this cool are 3x hot-swap 80mm fans. These are PWM and driven off the motherboard. What’s great is these fans are beefy, but they’re wolf in sheep’s clothing – They run extremely quiet under normal load – and you can barely tell the system is on in a normal office environment. When the system needs to work harder and generates more heat these fans will speed up (up to 7,000 RPM) so will get much louder. We barely noticed the system getting louder. It is an ideal system for an office or datacentre alike.

Check out the video below!﻿ 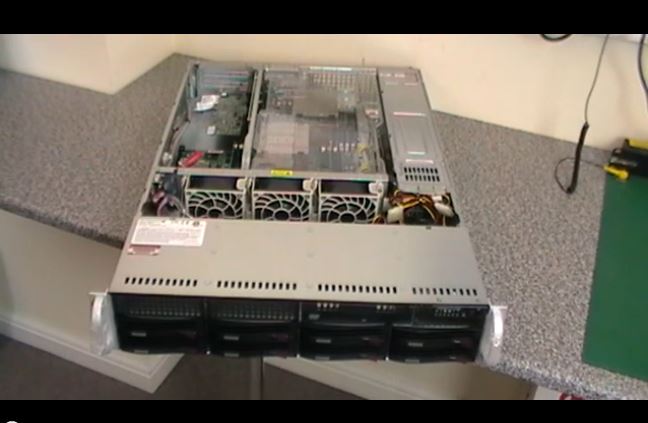